 Project 2: Determine the influence of rainforest on rainfall over the Amazon and Congo

Congo hosts the world’s second largest contiguous tropical rainforests and is a major terrestrial hydrological center globally. As the driest rainforest region, Congo also experiences extensive seasonal fires, intensive fires and land use, and increasing drought and forest browning, especially during the boreal spring rainy season. Yet, we do not understand what controls the rainfall seasonality, especially the role of the rainforests in this region. Research in literature has shown that moisture in the lower troposphere largely controls the frequency and intensity of the rainfall over the tropics and subtropics. We have used satellite measurements of water vapor isotopes, Rayleigh and mixing model simulations, along with water vapor, rainfall and large-scale moisture transport data to show that an increase of rainforest photosynthesis at the end of the Congo boreal winter dry season is the main provider for the increasing moisture in the atmosphere. Change of ET during its late boreal winter can influence moisture availability of the atmosphere, which in term, affects rainfall in spring. In contrast, the main source of moisture for the boreal summer and fall is transport from the adjacent oceans. The latter is consistent with the results reported in literature. Our results highlight the importance of the rainforests in determining the spring rainy season, and potential impacts of the rainforest browning and landuse on the observed rainfall variability in the boreal spring rainy season. 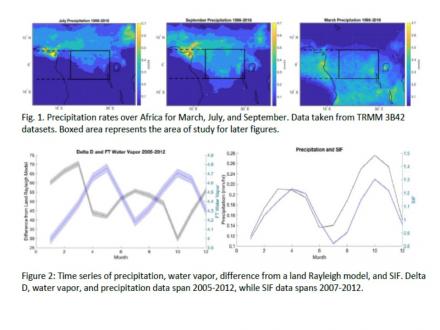